Recently, I’ve become mildly addicted to the old-school top-down combat racing game Death Rally. Now, I’m not really prone to addiction, nor am I particularly good at racing games, so I found this quite interesting. What is it that makes Death Rally so compelling? What got me hooked, and kept me hooked? Most importantly: which of these elements can I use in my own game? Here’s a somewhat nostalgic, entirely subjective, and utterly unscientific analysis.

You need to gear up, to upgrade, make headlong headway, strive to stride, stride to strive, evolve, improve, better, best. Buy & be one shining perfection. 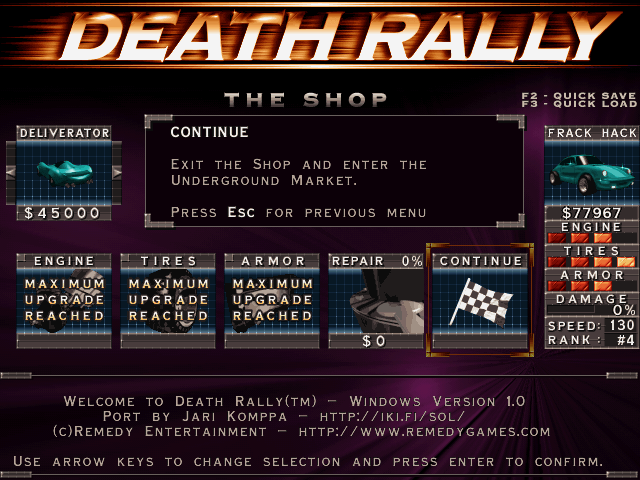 In the shop, there are six cars of increasing speed and price. For each car, you can buy a number of upgrades: engine, tires, and armour. Buying a new car will give you a partial refund of your old car and its upgrades. It’s advisiable to wait with upgrading until you can’t just pay for the car, but also for some upgrades as well; otherwise, it might not be an improvement.

Being able to buy and upgrade your vehicle adds much to the long-term interest of the game; it keeps you coming back to want more. Moreover, it’s something that people expect from racing games, even somewhat unusual ones like mine.

So, how many kinds of shopping carts are there? They basically all look the same. Clearly, a new cart isn’t as compelling as a new car. I’ll have to settle for upgrades to the thrusters instead. With a gradual increase in visual impressiveness, I think this can work almost as well. Instead of tires, I’ll have fins and spoilers that give you more control and also add to the cool looks. Armour might be a possibility; there is no concept of ‘damage’, but when taking a hit, you would lose less of your items if you are better defended. However, it’s not as clearly effective and useful as the other two, so I will probably leave it out.

Unlike in many other games, you can see all six of the cars from the start – they’re not shown as a silhouette with a question mark. This plays on your sense of desire, rather than your sense of curiosity. Apparently, it works. I wonder if there have been any scientific studies comparing the two approaches.

So jinx those rival suckers, let them go out in a blaze; you take the glory. Welcome to the underground market. What you want, we got. 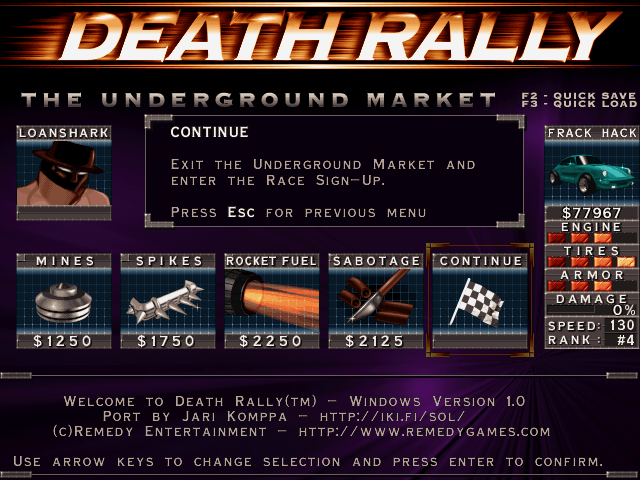 The underground market is where you buy one-off items, that affect only the upcoming race. There is a theoretical optimum somewhere, for example, if mines cost $1000, and increase your chances of winning $12000 by 10% (percentage points), you should always buy them. But of course, you don’t know the actual percentage, you want some variety, and sometimes you simply won’t have the money.

The underground market appears before you sign up for a race, hence before you know who your opponents are. This, in my opinion, is a major flaw. It makes the decision of which items to buy much less interesting and strategical. For example, if you would know that you’re up against a much faster car, you’d want the rocket fuel; but if you’re up against someone who will be on your tail all the time, you’d do better with some mines.

I don’t think I’ll implement something similar to this in my game. Rather, I’ll move these special items as powerups onto the race track itself, shifting the focus from medium-term strategy to short-term tactics. I think this is a better fit for a mobile game, and is a proven concept in games like Mario Kart.

Start out easy, get the feel of it. But remember: by the rules or fry the rules, play to win. ‘Nuff said. Now ride your machine, your motor-war-chariot. 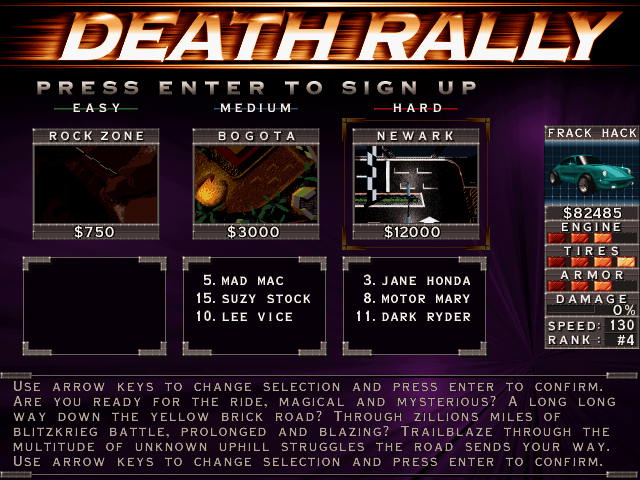 This part of the game is something you don’t see in many games. Death Rally lets you sign up for races in three divisions: easy, medium and hard. You will see opponents appearing one by one, while you select a division and press Enter to confirm. It can be beneficial to wait and see who else signs up!

The difficulty of these divisions is not intrinsic to the race itself, but determined mainly by the opponents that sign up for them. Strange, but in a single-player game, quite effective.

After signing up, occasionally someone will show up with a special mission, which can earn you extra cash. If you choose to accept it and fail, it will cost you. This is one of the few parts in Death Rally where the element of surprise plays a role.

Note that, even when you’re still driving around in the Beetle – sorry, the Vagabond – you can already sign up for the hard races. You’ll have your butt kicked three times over, and the game will warn you about this, but it’s possible. Here’s that ‘visible achievements’ thing again: it makes you want to be able to race there, which serves as the motivation to work your way up.

Of course, this is where it all comes together: the actual racing. I won’t dwell on this too much, because it is conceptually quite different from my own game. However, there can be an incredible amount of tension in some races, that I’d very much like to capture.

You race around a track for a set number of laps (4, 5 or 6, depending on the division). There are obstacles to prevent you from taking shortcuts, but some tracks have shoulders that you can drive on, albeit very slowly. Items appear randomly on the track, and disappear after a while: repairs, cash, ammunition, turbo fuel, and mushrooms that make the screen wobble.

Your car is equipped with guns that shoot straight forwards, and a limited amount of turbo fuel that makes you go faster if you press Shift. If you’ve bought them, you’ll also have eight mines that you can drop onto the track. Running into a mine deals some damage, and the blast slows you down or makes you go off course.

You can defeat opponents either by finishing before them, or by destroying them. You can see the opponents’ health at all times. This gives two points of tension: whether you’ll be able to overtake them (and stay in front), and whether you’ll be able to destroy them. In both cases, you can see how far you still have to go, which motivates you to keep trying. For example, if you see in the final lap that an opponent up ahead has only 5% health left, it’s very tempting to try and destroy them before they reach the finish line.

This aspect of “how far left to go?” is currently not in my game. Opponents will pick up items, but you can’t see what items they have, nor the total value of these items. Conclusion: this must be visible at all times! Ideally, it should be shown together with an arrow pointing out where that opponent is, so you can more easily go over and kick his butt. Of course, AI drivers will also get this information, so if you happen to be the richest guy in the race, you’d better watch out …

After a race, you see the rankings screen. It shows the outcome of the race, and its effect on everyone’s position in the rankings. 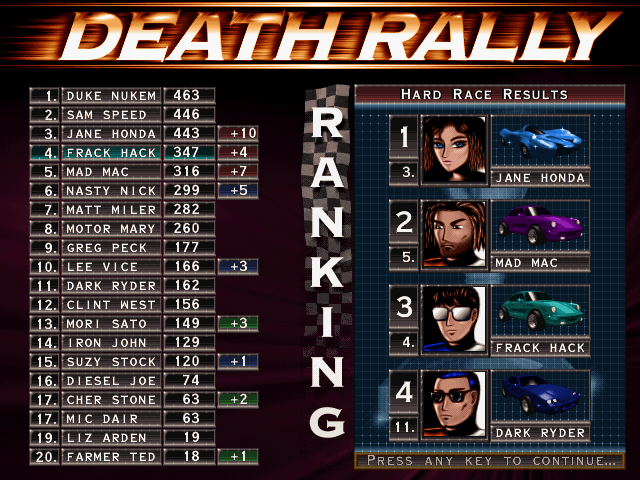 This is the overarching eventual goal of the game: to become first on this list. (Although you’re never told this explicitly, there’s a boss race at that point.) You cannot become first by just racing on the easy division, because your opponents in the medium and hard divisions rack up points faster than you do. This is why you have to upgrade, to stand a chance in those divisions.

Here’s that ‘everything visible’ thing once more. It’s crystal clear what needs to be done, throughout the entire game.

In summary, what desires keep you playing Death Rally? From high-level to low-level, you desire …

A similar breakdown for my game would be a very useful starting point for the rest of the overarching design. I’ll get that done today, but since this post is plenty long enough without all that, I’m saving it for a future post. Meanwhile, go play Death Rally!

Perk up. This is a free newsflash. I am True Tom Rhymer, and I know the road. I got petrol in my veins, I got wind in my engine-oiled hair. I’ve been where you are now, hotshot, thunderboy, youngblood. I’ve been farther down the road than you’ll ever get.