I realized that the problems I was having with the tracking of the water volume were not as easy to fix as I thought. It seemed that grid-based (Eulerian) methods are very suitable for a continuous fluid, but not so good when a sharp boundary between water and air is needed.

So I turned to particle-based (Lagrange) fluids instead. The standard way to do this is the method of Smoothed Particle Hydrodynamics, or SPH. The problem of a particle method is that you know the density, velocity etcetera only at a very limited number of places: at the particles themselves. Interpolation is not as easy as with a grid-based method, so we use a smoothing kernel over the neighbouring particles instead.

It turns out that the biggest problem with SPH is to get the parameters right. Unlike with a grid method, most don’t even have a physical interpretation! The most important parameter is without doubt the size of the smoothing kernel. Too small, and your particles won’t affect each other anymore; values will be based on just a single particle. Too large, and you will get too much smearing of values. It’s the same with the ‘spring’ that is added between particles as a result of the pressure difference: too weak, and the particles will happily bunch together at the bottom of the volume; too stiff, and the simulation will blow up.

Even the parameters that should have a physical interpretation, don’t. At least, that’s my experience. I started with values that made sense in the real world: metres, seconds, kilograms, Pascals. These values worked well in my grid-based solver. In the particle solver, it took hours of tweaking and fiddling. In a box of size 1 by 1, gravity ended up at 10000, viscosity at 0.0001, the time step at 0.000005. But then I finally had something that slightly resembled a fluid. 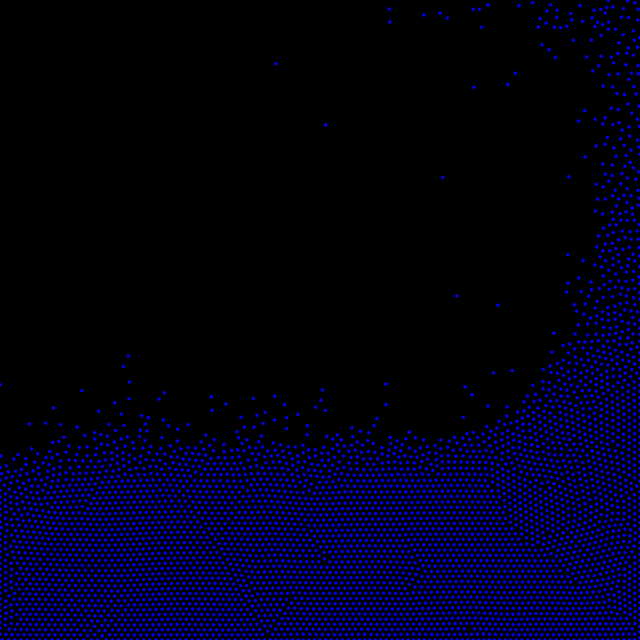 It does not look like a decent water surface, because I haven’t added the surface tension term yet. That’s something for tomorrow.

But all this trouble is giving me doubts about the use of the SPH method. It’s like walking a tightrope, and the slightest change in parameter value causes the simulation to blow up. Grid methods seem much more predictable in that respect; yes, they can blow up, but at least there’s theory that tells you when you’re safe.

Hybrid approaches exist, that use a grid method to compute the flow, but particles to track the surface. They seemed needlessly complex, but they might give the best of both worlds. Or the worst. I’ll have a look tomorrow.