▴ Next: Change of direction

▾ Previous: Some facts about beavers

My mind is always full of ideas that I’ll never have time for. But occasionally, one of them does get executed. This is one of those times.

The basic premise is: racing with shopping carts. It’s the controls that make it different. Like a real shopping cart, you push/pull with two hands. This way, a lot of special movements become possible that you cannot do in a normal racing game: driving diagonally, driving sideways, or even go through a straight corridor while spinning around! Points could be awarded for special manoeuvres, much like in the Tony Hawk skateboard game series. 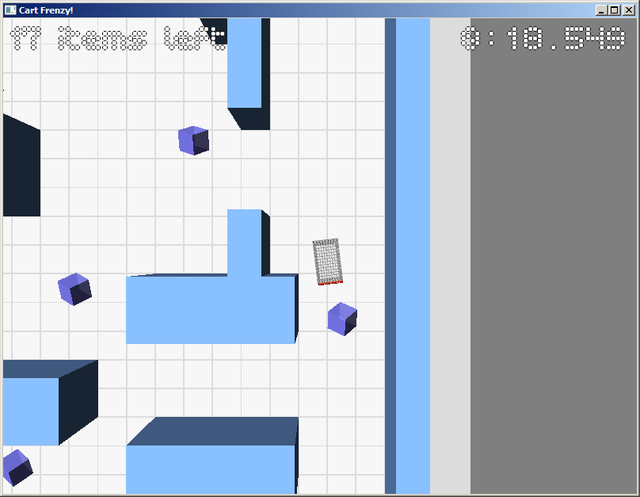 I hacked together a prototype, using C++, OpenGL and the almighty Box2D physics engine, put it up for download, and asked people for feedback. The more interesting lessons:

If you want to try the prototype, download it here and unzip both files to the same directory. It requires Windows and functioning OpenGL drivers (some people reported issues with these, but I won’t be fixing them). Pushing on the left is done with the ESDF keys, on the right with IJKL. (Using a qwerty or similar keyboard layout is recommended. Dvorak users press F2.) With F3, you can toggle between third-person and top-down cameras.

▴ Next: Change of direction

▾ Previous: Some facts about beavers