I’ve been working on and off on this project for almost two months now, so it’s time I blogged something about it. Here’s the elevator pitch:

It all started with a quick prototype I made about a year ago, called Doomsray, running on Android phones: 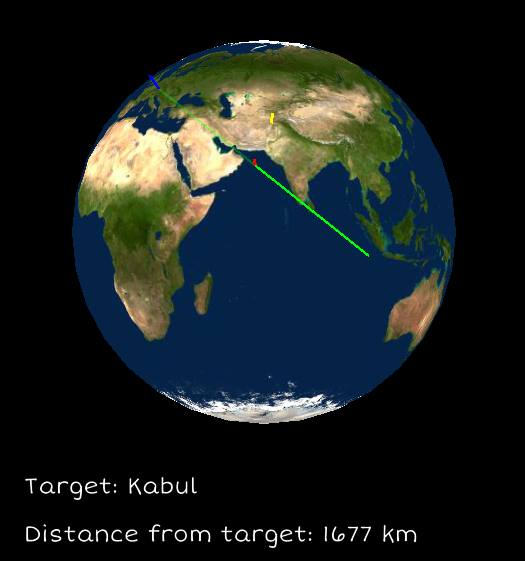 The game presents you with the name of a city, and you using your phone as a kind of laser pointer to point directly at it (so down, through the Earth). It would have cartoon villains (one character for each player) who, for some silly reason, have a grudge against someone in said city, and use their mega-powerful DOOMSRAY to blast a tunnel straight through the Earth to blow them up. (It’s not actually violent, because the game is so fiendishly hard that you always miss.)

This idea came to me when I noticed that the path of long-haul airplane flights always appears curved on a map; in fact, the inherent flatness of the map is distorting our sense of where things really are. Indeed, Doomsray does demonstrate this nicely: when you’re on the northern hemisphere and point due west, as you point more downwards, you’re not actually going west on a map, but southwest. In the extreme case, pointing straight down, you obviously end up on the southern hemisphere.

I didn’t get much response on the prototype when I posted it on Facebook, and left it at that. But two months ago I picked it up again and decided to make it into a game, just to get some more experience finishing and publishing stuff.

Here are some screenshots. All this is placeholder art, which is why all the villains have the same face. But it’s high-fidelity enough to let me write code for the layouts and test usability. Here’s the main menu: 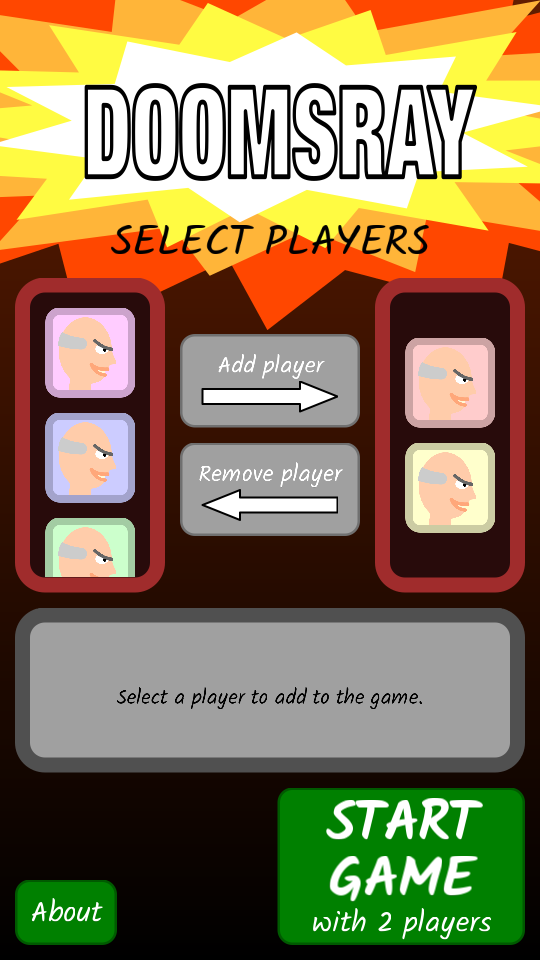 The screen where you aim (the compass and inclination indicator respond to your phone’s sensors): 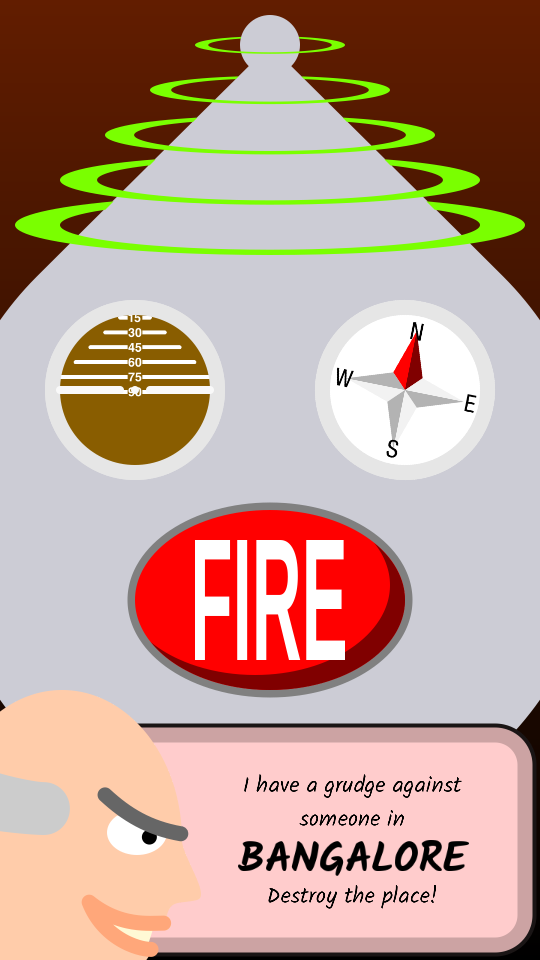 The result of your shot, with a nice 3D visualization that you can drag to look around, and a picture that would eventually depend on what type of terrain you hit: 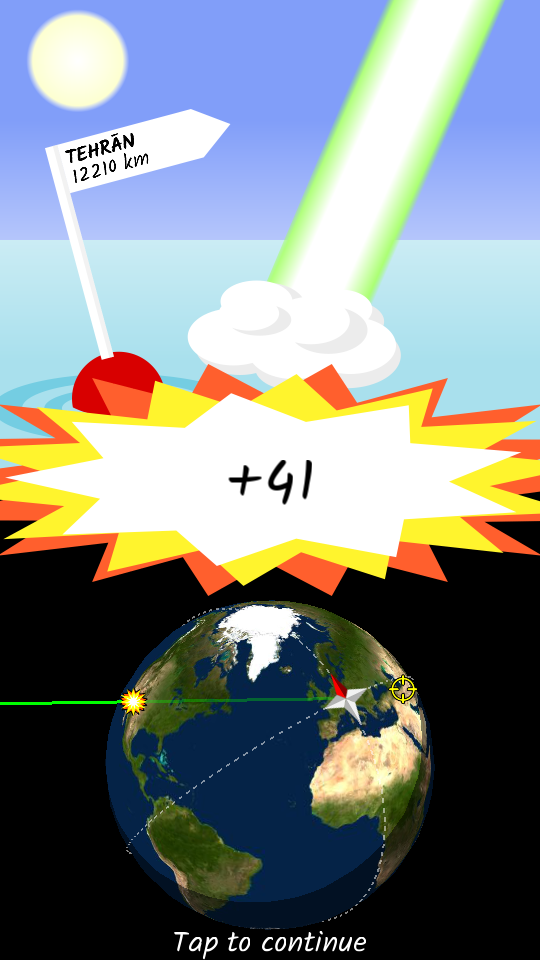 And, after 10 rounds, the final scores, with a slowly spinning, heavily smoking Earth in the background: 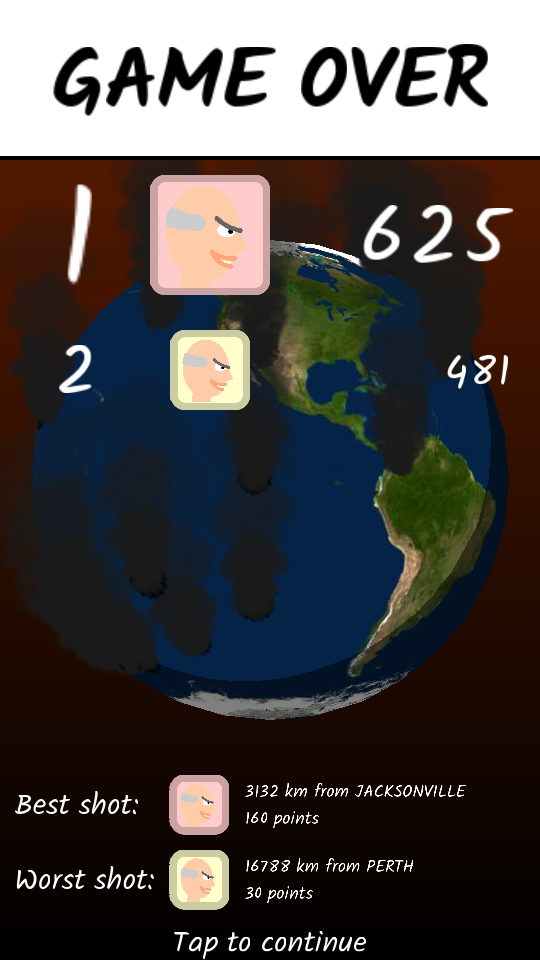 I tried this on a few people, just pushing it into their hands without any instructions except “go play it”, and by and large they didn’t immediately get it. Turns out, pointing your phone downwards is a thoroughly counterintuitive move! I tried to fix this by detecting when the phone was pointing up, and replacing the fire button by a big fat arrow saying “POINT PHONE AT TARGET THROUGH EARTH”. It didn’t help much. Apparently (guess what) even six words are too much for people to read. Or there was too much else going on on the screen.

Then someone mentioned that they initially thought that they should be pointing up and that the ray would follow the surface of the Earth. While that wouldn’t make much sense physically, it got me thinking. Why not go up instead? A rocket is something everyone can readily grasp. And though it added an extra variable that the player would have to get right (velocity, besides compass direction and inclination), I figured that being hilariously hard was going to be a feature of this game anyway.

At the same time, it let me get rid of the violent aspect. The result is now slowly turning into the game I’m tentatively calling Ballistic Delivery Service. I’m not quite sure about the name yet, but it seems to be one of the few that is both appropriate, and not taken yet. (Orbital Express would have been my favourite.) It’s slowly coming together, and I keep iterating by pushing my phone into people’s hands. (This is great about mobile games.) There’s still a fair amount of work to do, especially on the progression and scoring side, but it’s improving. More to come in future posts!